Types of hinges and their corresponding uses

Types of hinges and their corresponding uses

Lightweight hinge–the hinge board is thinner and narrower than ordinary hinges, and is mainly suitable for light-weight wooden doors and windows and general wooden furniture.

Core-pulling hinge–the hinge axis (pin) can be pulled out. After pulling out, the door and window sash can be removed for easy scrubbing. Mainly used on wooden doors and windows that need to be dismantled frequently.

Square hinge–the hinge board is wider and thicker than the general hinge. It is mainly used on doors and windows or furniture with larger weight and size.

H-type hinge – is a kind of core-pulling hinge, in which a loose sheet can be removed. Mainly used on wooden doors or screen doors that need to be disassembled frequently.

T-Hinges–Applicable to wider doors, such as factory, warehouse doors, etc.

Fan-shaped hinge–the thickness of the two sheets of the fan-shaped hinge is about half thinner than that of ordinary hinges, and it is suitable for various doors and windows that need to be opened and closed.

Silent hinge — also known as nylon gasket hinge, when the door and window are opened and closed, the hinge is silent, mainly used on the doors and windows of public buildings.

Single Flag Hinge–The hinge is made of stainless steel, which is rust-resistant and wear-resistant, and is easy to disassemble. Mostly used on double-layer windows.

Multi-purpose hinge – when the opening angle is less than 75°, it has an automatic closing function, when it is at an angle of 75°-90°, it is self-stabilizing, and when it is greater than 95°, it is automatically positioned. The hinge can be installed on the door instead of the ordinary hinge.

Double-shaft hinges–The double-shaft hinges are divided into two types, left and right, which allow the door leaf to be opened, closed and disassembled freely. Applicable to general doors and windows.

Screen door spring hinge–it can automatically close the door after opening, and can only be opened in one direction. The pin of the hinge can be pulled out to adjust and exchange the spring, which is mostly used on the screen door of solid web steel structure.

Bearing hinge (brass)–one one-way thrust ball bearing is installed in each leaf plate shaft of the hinge, the door switch is light and flexible, and is mostly used on heavy-duty doors or special steel-framed steel plate doors.

Inclined surface release hinge – this kind of hinge utilizes the component of the inclined plane of the hinge and the door leaf to automatically close the door. It is mainly suitable for lighter wooden doors or half doors such as toilets.

Cold storage door hinge–painted exterior, large made of steel plate, small made of cast iron. For use on cold storage doors or heavier insulated doors. 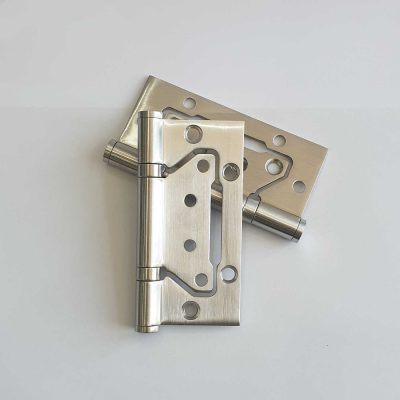 What are the specifications of stainless steel hinges
2022-03-16